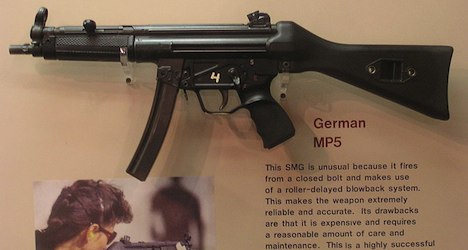 The 51-year-old, who worked for the cantonal police force for 20 years, was authorized to order guns and other weapons, according to an online report from 20 Minutes newspaper.

However, he took advantage of his position to order firearms, which he paid for with his own money then resold to others, the newspaper reported.

He admitted in the Basel criminal court to selling to a Zurich friend illegal weapons, including Heckler & Koch MP5 machine guns with silencers and other guns.

He also sold him hand grenades from the former Yugoslavia.

The force suspended him from duty after learning of the allegations.

“I am a real enthusiast, a serious collector,” the former cop said in defending his actions, 20 Minutes reported.

“My client is not a stamp collector, certainly, but let’s not treat him like a terrorist or a bank robber,” the defendant’s lawyer added, the newspaper said.

But the judge was not convinced, issuing the suspended jail term sought by the prosecutor.

The man’s collection of firearms was seized and will be sold, 20 Minutes said.

At the time of his suspension, he resigned from the force and has since become a tyre salesman, the newspaper reported.