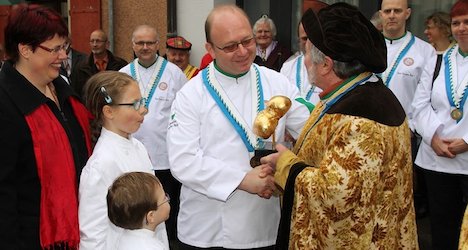 The only thing stolen was “le pain d’or” (the golden bread), a prestigious trophy awarded to Buet as the best baker in the canton of Vaud.

The burglary occurred around 2am when the shiny trophy, three gilded balls of bread arranged like a clover leaf, was snatched from the smashed front window of the bakery and pastry shop in the Vaud capital, where it was on display.

“It is valued at 10,000 francs ($10,960) because it was created by an artist but they (the criminals or criminal) would not be able to do anything with it,” an angry Buet told 20 Minutes newspaper.

The baker could never have imagined that anyone would want to pinch the trophy, which he received in May this year.

But Buet thinks whoever took it may have imagined that the prize was composed 100 percent of precious metal.

“You would have to be stupid to think that an artisan would display four kilograms of gold in his shop window,” he told 20 Minutes.

The trophy is only handed out every three years, so Buet’s title stands from 2013 to 2015.

“It’s an honorary title,” Roger Neuenschwander, grand master of the bakers’ confrerie, was quoted as saying by 20 Minutes.

“It brings nothing at all to whoever stole it,” Neuenschwander said.

He added that it makes sense to display such a trophy in the shop window to show customers that the baker was regarded at a specific time as the best in Vaud.

Buet said, however, that if a copy of the trophy is presented to him he will store it in a secure place away from prying eyes.

“It’s a prize that represents a consecration and I could not imagine receiving it (before),” he told 20 Minutes.