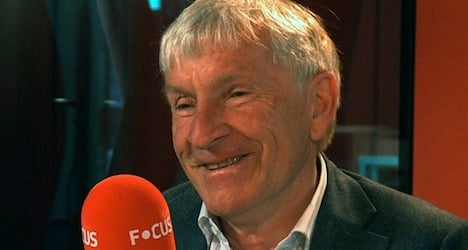 Erich Vogel, 74, a legendary figure in Swiss soccer, was arrested and detained behind bars eight days ago, Blick said in an online report on Friday.

Vogel is accused with an unnamed players’ agent of attempting to extort 131,000 francs ($144,000) from Young Boys’ Fredy Bickel, who used to work for Vogel at the Zurich-based Grasshopper Club.

According to the report, the money was demanded in return for a document from 2002 allegedly signed by Bickel that gives the player’s agent a right of refusal over all Young Boys’ players.

Bickel claims to have never signed the document, Blick said.

Police arrested Vogel eight days ago at his home at Uitikon-Waldegg in the canton of Zurich, which was searched, the newspaper said.

The former manager was set to have a meeting with the players’ agent at a motorway restaurant the same day but the rendezvous never occurred because the agent was also arrested, Blick said.

Investigators are scheduled to interview Bickel next week.

Meantime, after spending two days in a Zurich detainment centre Vogel and his co-accused have been separately placed in different prisons in the canton of Zurich.

As manager of Grasshopper, Vogel led to the team to several championship titles.