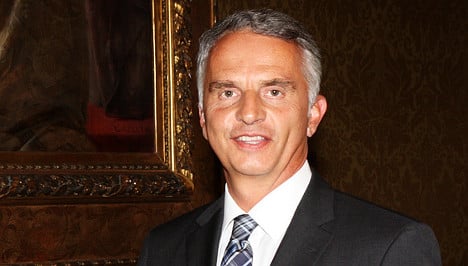 "It is possible that the dialogue will continue in Geneva from October," said Didier Burkhalter, whose country represents the United States' interests in Iran.

The meeting would be between "chief negotiators" on Iran's nuclear programme and all the parties involved would be present, said Burkhalter, speaking from New York during an annual summit of the UN General Assembly.

The negotiations are between Iran and the so-called P5+1 group which is made up of the five permanent UN Security Council members, Britain, China, France, Russia and the United States plus Germany.

He said Switzerland provided a "communications channel" between Washington and Tehran.

Ashton, who leads the talks between the P5+1 and Iran, said Monday she would meet Zarif in Geneva in October for the first round of talks since Iran's new President Hassan Rowhani took office.

The last round of talks was held at the start of April in Almaty.

There has been intense speculation that Rowhani could meet his US counterpart Barack Obama on the sidelines of the UN General Assembly.

The United States, which has no diplomatic relations with Iran, has played down the prospect of a meeting.

However, the two countries' top diplomats will hold a historic interaction when they take part together in talks on Iran's nuclear programme.