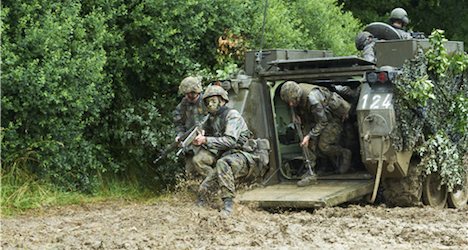 The army imagined a scenario in which France was in financial turmoil and had split up into several regional entities.

One of these was preparing attacks on Switzerland to retrieve money it had apparently stolen from it.

"The exercise has strictly nothing to do with France," said Daniel Berger, captain of the Swiss armoured brigade.

"It was prepared in 2012 when fiscal relations between both countries were less tense," he added.

Switzerland is famed for its bank secrecy laws, which critics say have enabled many clients to shield their wealth from the scrutiny of tax inspectors back home.

But these once sacrosanct laws are slowly being eroded as France and other countries such as the United States step up their fight against tax evasion in a troubled economic climate.

In 2012, the Swiss Army had imagined a different scenario: they were faced with an influx of refugees after the euro currency had crashed and provoked social chaos in Europe.