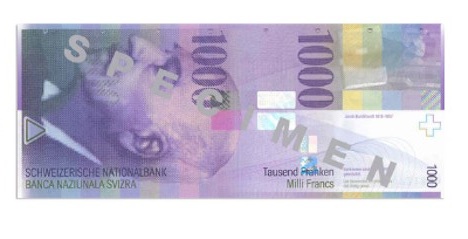 The SNB admitted on Tuesday that it had been aware since autumn 2012 that a “small number” of 1,000-franc notes were in circulation were not issued by the central bank.

During the production process at printer Orell Füssli around 1,800 of the notes were stolen before they had been through all the stages of production, the bank said.

It said the information was not made public before now in agreement with Switzerland’s office of the attorney general, which is investigating the case, marking an embarrassing security breach in the Swiss banknote production process.

“Subsequent checks revealed that unfinished notes from current production at Orell Füssli had been stolen,” said the printing, publishing and book retailing company, which traces its history back to 1519.

The two men had 37 of the notes in their possession and were arrested on site, the Swiss attorney general's office said in a statement.

One of the men, who lives in Switzerland, had been remanded in custody and had spent more than seven months behind bars, it said.

One of his acquaintances had been arrested in Zurich in April but had been released on June 14th, the statement added.

Over the past two weeks, 17 invalid 1,000-franc notes had been seized, all with serial numbers added in after printing, the attorney general's office said.

Some of the perforated numbers had been tampered with.

Orell Füssli said it had taken “organizational and personnel” action to tighten its security measures.

The company added that it had “painstakingly reviewed its security measures in detail” and “arranged for a security audit to be conducted by an independent agency”.

Orrell Füssli said it is liable for any losses incurred by customers relating to the stolen banknotes.

“Holders of the Swiss franc notes in question will be recompensed at their nominal value via the Swiss National Bank.”

The SNB said the banknotes stolen had no serial numbers, although numbers were subsequently printed onto at least some of the notes.

It is also possible that the “perforated number” is missing or has been tampered with, the central bank said.

The bank said that anyone suspecting that they may be in possession of such notes can take them to a bank to check them for their authenticity.

They can also be checked at the Counterfeit Currency Central Office at the Federal Office of Police in Bern, at the SNB (in Zurich or Bern) or at any Swiss police station, it said.