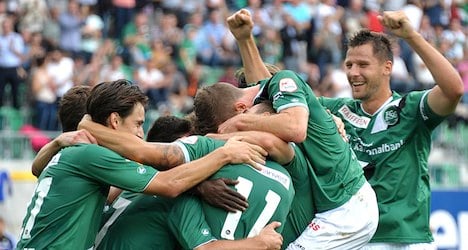 Swansea thumped Valencia to come away with a 3-0 win from their opening Group A trip to the Mestalla, while the Swiss also won their opener at home to Russian outfit Kuban Krasnodar.

Goalkeeper Michel Vorm believes that Swansea can take heart from their record at home in European competition this season despite injury worries and a 2-1 home defeat to Arsenal in the Premier League at the weekend.

The Welsh outfit could be without captain Ashley Williams with an ankle ligament problem, with right-back Angel Rangel (ankle) and wingers Roland Lamah (toe) and Pablo Hernandez (thigh) also in a race for fitness.

"We have a few injuries which is disappointing, but we have coped quite well and I don't think we feel tired," said Vorm.

Meanwhile, Valencia, the 2004 UEFA Cup winners and two-time Champions League finalists, are desperate for all three points as they travel to Kuban Krasnodar, who lost 2-0 to St Gallen on matchday one.

English side Tottenham Hotspur, who got their campaign off to a winning start with a 3-0 victory over Norwegian outfit Tromso, also travel to Russia when they meet Anzhi Makhachkala in Group K.

FA Cup holders Wigan Athletic, also bidding to win promotion back to the Premier League and impress in Europe, will be looking to get a home win when they host Slovenian club Maribor after drawing 0-0 away to Zulte Waregem in Belgium in their Group D opener.

In other games, Fiorentina of Italy are hoping to follow their 3-0 win over Pacos Ferreira of Portugal when they travel to Group E rivals Dnipro of Ukraine, who also won their opener.

French Cup holders Bordeaux will try to put their chaotic start to the season behind them against Group F rivals Maccabi Tel-Aviv of Israel as Germany's Eintracht Frankfurt go to Croatia to face Rijeka.

PSV Eindhoven, the 1988 European Cup winners, travel to Chornomorets Odessa after a shock 2-0 defeat at home to Ludogorets Razgrad of Bulgaria in Group B, and Dynamo Kiev visit Rapid Vienna afer losing 1-0 at home to Belgian Cup holders Genk in Group G.

Meanwhile, Lazio take on Trabzonspor in Turkey in Group J and Sevilla are at home to Bundesliga outfit Freiburg in Group H.