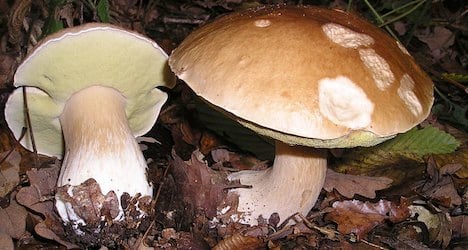 Cantonal police said on Thursday they found the lifeless body of a 49-year-old woman who was searching for mushrooms in the Cimadera mountains.

The Lugano resident, discovered just before 1.30 pm, was the victim of a fall in an inaccessible area for reasons that remain under investigation, police said.

The accident follows the fatal fall of another mushroom picker earlier this month.

On October 1st, a 72-year-old man lost his life near Locarno after tumbling 200 metres down a mountain slope.

The incident occurred in the evening while the man was looking for mushrooms in the Arcegno region above Lake Maggiore at an altitude of 620 metres.

Mushroom picking is a popular activity in Ticino and other parts of Switzerland at this time of year.

An estimated 5,000 species have been identified in Swiss forests.

While many of these are under threat, mushroom picking is not believed to be the cause.

However, there are restrictions on the amount that can be picked and those collected are to be used for personal use only.