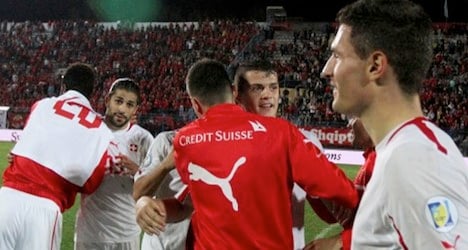 Swiss players congratulate themselves after the win against Albania. Photo: Gent Shkullaku/AFP

Second-half goals from Xherdan Shaqiri and Michael Lang gave Ottmar Hitzfeld's side an unassailable 21 points at the top of Group E.

The Swiss will be playing in the finals for the third time.

It was a development that left one famous Swiss fan overjoyed.

"Switzerland made it to the World Cup, how happy am I on a scale 1-10?" tweeted tennis star Roger
Federer.