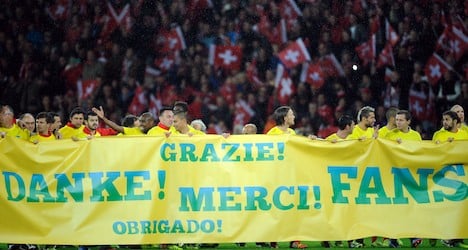 The Swiss win dashed Slovenia’s hopes of qualifying for the World Cup.

Granit Xhaka scored a goal in the 74th minute to give Switzerland the home victory in front of 22,000 fans at Bern’s Stade de Suisse.

Switzerland, winners of the qualifying Group E, headed into the game knowing they had already qualified for Brazil 2014 after beating Albania 2-1 last Friday in Tirana.

The loss for Slovenia left them behind Iceland, which held on to a qualifying spot thanks to a 1-1 draw at Norway.

Switzerland tops the Group E standings with 24 points, seven points ahead of Iceland.

The strong finish means that in the draw for the Brazil tournament on December 6th the Swiss will not face strong teams such as Brazil, Spain, Germany or Argentina in the first round of the finals.

One victim of the Swiss World Cup campaign was winger Xherdan Shaqiri, who is  expected to miss up to seven weeks with his team Bayern Munich after tearing his right hamstring on Friday.

The 22-year-old scored in Switzerland's 2-1 win against Albania, but then came off with 53 minutes gone in Tirana.

A scan by Bayern's doctor Hans-Wilhelm Mueller-Wohlfahrt in Munich has revealed the extent of the injury with Shaqiri expected to be out until the start of December for the European champions.
"I'm disappointed, but will be trying to get fit again as quickly as possible," Shaqiri told the Bayern website.

"It's too bad it happened now, but I'll be back."
The winger said he is relishing another crack for Switzerland at the World Cup.
"The anticipation is huge, South Africa was a crazy experience for me as I was only 18," he said of the 2010 World Cup.
"In Brazil, I will hopefully get a lot more game time, we have a great team and want to make a bit of a splash for Switzerland."