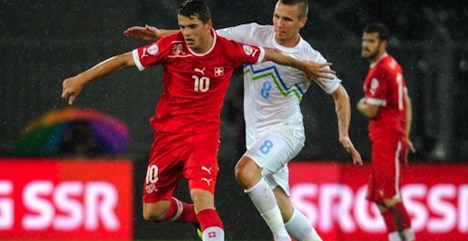 Their veteran German manager Ottmar Hitzfeld, due to retire after the tournament, has bet on youth to replace stalwarts who have ended their international careers.

Shaqiri, who made his senior Switzerland debut in 2010, has helped his country overcome the 2011 departure of Alex Frei, who despite being their all-time top scorer lost favour with fans.

Currently nursing an injury that will keep him out of play for several weeks, Shaqiri, has injected the kind of flamboyance long missing from the Swiss game.

Frei, a Basel player like Shaqiri, was followed out the door by club and country teammate Marco Streller, after the failed campaign to qualify for Euro 2012 sent Hitzfeld's star falling.

Despite losing their iconic striking duo of Frei and Streller, who ruled the roost in the previous decade, Switzerland have seen their team spirit grow thanks to Hitzfeld's gamble on youth, which has erased past criticism.

The 64-year-old's strategy is no accident.

He has drawn players from the highly-rated Swiss squad that won the Under-17 World Cup — Switzerland's only international trophy.

Among them are Haris Seferovic, at Spanish club Real Sociedad, and Granit Xhaka of Germany's Borussia Monchengladbach. Both are aged 21.

Many of the new faces have roots in Switzerland's Balkan migrant community, which emerged when seasonal workers came to the country from the then Yugoslavia in the 1970s and which expanded when the Alpine country admitted refugees from the region's wars of the 1990s.

"Rainbow" teams are far from rare in European countries with a tradition of immigration.

In Switzerland's case it adds an extra layer in a country where language and geography go hand-in-hand, with the north and east German-speaking, the west French, and the south Italian.

Former Borussia Dortmund and Bayern Munich boss Hitzfeld, in charge since 2008, has taken Switzerland to seventh in the FIFA rankings and put them among the top seeds for December's World Cup finals draw.

"This status will make my players mentally even stronger," Hitzfeld said this week.

"But I want them to keep their feet on the ground,"

They secured their berth in Brazil in their penultimate qualifier, beating Albania away last week.

"Under Ottmar Hitzfeld, Switzerland for the first time reached a World Cup before their final qualifier," said Peter Gillieron, head of the Swiss Football Federation.

"And with him in charge, we've pulled off the historic exploit of getting into the first pot for the draw and becoming a top seed."

Switzerland's seven wins and three draws in the World Cup qualifiers are part of a 14-match unbeaten run that also saw them beat Brazil 1-0 in a friendly in August.

Another highlight was a 5-3 win over Hitzfeld's native Germany in Basel in May 2012.

"Whatever group we're in, our goal in Brazil is to clear the group stage and keep going with as many matches as possible," he said.

"There's no point in going to Brazil to play just three matches," he said, recalling Switzerland's disappointment at the 2010 edition in South Africa.

They were the only team to claim the scalp of eventual champions Spain, beating them 1-0 in their opening game, but got no further than the group stage after losing 1-0 to Chile and drawing 0-0 with Honduras.

Next year's tournament is Switzerland's third World Cup in a row.

In Germany in 2006, they finished top of their group, ahead of eventual semi-finalists France, plus South Korea and Togo, but were knocked out on penalties by Ukraine in the next round.