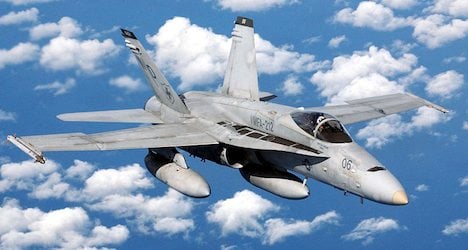 An F/A-18 Hornet fighter plane similar to the one that crashed. Photo: Wikimedia Commons

Rescuers also found the aircraft's black box, the defence department said.
"Both people onboard the F/A-18 fighter jet that crashed yesterday have been found dead," the department said in a statement.
The F/A-18 Hornet fighter jet was one of two that took off in the canton of Bern on Wednesday for a training mission, but it crashed shortly after into a cliff overlooking a branch of Lake Lucerne.
A professional air force pilot and his passenger, an air force doctor taking part in the training exercise, were killed in the crash.
Rescue workers had recovered both bodies and an autopsy had been ordered, the defence department said.
The aircraft's black box had also been salvaged and was being examined.
Depending on the condition of the box, the examination could take "days or even weeks", the department added.
The army has launched an investigation into why the crash happened and has temporarily suspended all flights by its fleet of McDonnell Douglas single- and double-seated F/A-18s, which before Wednesday's accident totalled 33 aircraft.
Another of the Swiss Hornets crashed in Crans-Montana in the canton of Valais in 1998, killing both pilots.