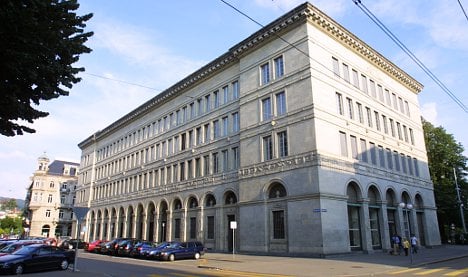 From January through September, the Swiss National Bank (SNB) said it had suffered a consolidated loss of 6.4 billion francs ($7.1 billion).

The loss, meanwhile, shrunk compared to the 7.3-billion-franc hit the central bank said it had taken during the first half of the year.

Explaining its loss, the central bank said it had not altered the quantity of gold in its possession, but that the value of those holdings had dropped by 10.7 billion francs from January to September amid plunging prices for the precious metal.

SNB, meanwhile, said that it had raked in a four-billion-franc profit on its foreign currency positions during the first nine months of the year.

At the same time though, the bank, which for more than two years has been defending an exchange rate floor for the franc against the euro in a bid to stop the Swiss currency from becoming too strong to sustain the country's export industry, said it had suffered exchange rate related losses of five billion francs during the period.

Because its result depended heavily on the price of gold, foreign exchange and capital markets, "strong fluctuations are . . . to be expected," the central bank said, pointing out that "only provisional conclusions are possible as regards the annual result."

SNB also reiterated Thursday that a loan it had granted the stabilization fund put in place in the wake of the 2008 global financial crisis to save the country's biggest bank, UBS, had been repaid in full and that UBS was expected to repurchase its once toxic assets by the end of the year.

UBS lost billions of dollars in the United States subprime home-loan crisis and the ensuing financial turmoil, prompting a rescue operation in which the central bank set up the fund to take over $38.7 billion in what at the time were considered toxic assets.

The stabilization fund had raked in a profit of $981 million and had contributed 492 million francs towards the SNB consolidated profit during the first nine months of the year, SNB said.

Editor's note: This article was changed to correct the trading price of gold in September and at the end of 2012.