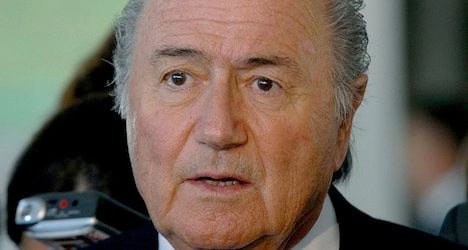 Blatter, president of Zurich-based FIFA, football’s world governing body, is ranked 69th on the 2013 list of 72 released on Thursday, a ranking that is unchanged from the previous year.

Microsoft co-founder Bill Gates is the top businessman on the list, ranked sixth.

Blatter, 77, is currently serving his fourth term as FIFA president after the organization’s ethics committee cleared him in April of bribing allegations.

Forbes calls him a “soccer patriarch” who heads up the governing body of “the world’s most popular sport and unofficial religion”.

The sport, it says, expects to generate $4 billion in revenue by the close of next year’s World Cup in Brazil.

Blatter is currently tackling controversy over the selection of Qatar as host of the 2022 World Cup, but he remains “bullish” on the choice, Forbes notes.

Critics say the Middle Eastern venue is too hot for football in the summer and a possible move to switch the competition to the winter for 2022 is courting stiff opposition from European football leagues.

Blatter was forced to issue an apology this week after making "light-hearted" comments about Real Madrid star and Portugal national Cristiano Ronaldo.

At a talk in Oxford, he indicated that Ronaldo had "more expenses for the hairdresser" than rival Lionel Messi, voted the world's best footballer for three years in a row.

The remarks sparked a protest from Real Madrid, with the football team's president Florentino Perez branding them as "unacceptable".

Blatter, a native of the canton of Valais, studied business and economics at the University of Lausanne and once served as head of public relations for the Valais tourist board.

First elected to head FIFA in 1998, he earned some renown after being elected president in the early 1970s of the World Society of Friends of Suspenders, an organization that tried to stop women replacing suspender belts with pantyhose.

For more on the "most powerful" list, check here.