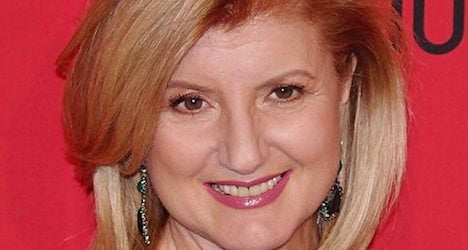 The University of Geneva said on Tuesday that Huffington, 63, was invited as a guest speaker at the 2013 Latsis prize ceremonies, which honour bright post-graduate students.

She is best known as the creator and editor-in-chief of The Huffington Post news website, launched in 2005 in the US.

This site subsequently spawned others based in the UK, Canada, France, Germany, Italy, Spain and Japan, along with one in French aimed at North African (Maghreb) countries.

But Huffington, the former spouse of onetime Republican congressman Michael Huffington, has carved out an illustrious career in other media, as a blogger, tweeter, writer and broadcaster.

She’s also dabbled in politics, veering from the right wing to the centre-left, and ran as an independent candidate for governor in California ten years ago.

Educated at Cambridge University, she wrote a book 40 years ago that attacked the women’s liberation movement and was a supporter of Republican politicians in the US such as Newt Gingrich and Bob Dole before shifting her support to the Democrats.

Huffington is set to give a talk in English entitled: The Brave New World of the “New media”: how social media has revolutionized the communications landscape.

Huffington is set to give her analysis of what works on the web.

“The media have a tendency to focus on what doesn’t work,” she said in a statement relayed by the University of geneva.

“Our priority at the Huffington Post is to highlight also what works.”

The event is set for November 19th at the Piaget auditorium in the Uni Dufour building, starting at 6pm.