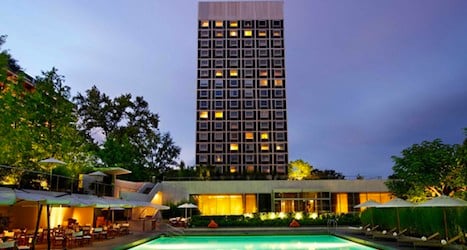 Convoys of black limousines, lights and horns blaring, swept up to the hotel’s imposing doors, carrying top diplomats from Europe, the United States and Iran in a flurry of unexpected activity.

The surprise arrival in Geneva on Friday of US Secretary of State John Kerry, who cut short a visit to the Middle East to join negotiations between world powers and Iran already underway, raised the stakes to another level.

The British, French and German foreign ministers — all from the group known as the P5+1 — also rushed to Geneva to join the diplo-fest.

Running the gauntlet of a barrage of cameras and crowds of journalists, they strode into the InterContinental Hotel, just steps from the United Nations in the Swiss city, before meeting for hours of marathon talks.

Kerry’s out-of-the-blue decision to join the talks triggered a frenzy, amid speculation that after ten years of virtual stalemate, Iran was ready to scale back some of its nuclear programme feared to be a grab for an atomic weapon.

Tehran denies the charges, but with its economy crippled by layer upon layer of sanctions and the new leadership of President Hassan Rouhani elected on a pledge to ease the hardship, it wants some kind of resolution to the standoff.

After meeting on Friday in the EU mission in Geneva, the talks relocated to the hotel’s plush conference rooms.

Messages arrived from the press attaches of the various delegations saying talks between one leader or another had begun, but that was the only sign of the fierce haggling happening just floors away.

The mob of reporters were kept well at bay, until the officials had to walk through the grand hotel lobby, when they pounced, firing off questions hungry for any tidbits about how things were going.

Exasperated hotel security staff called in the police, and time and again fought a losing battle to kick the reporters back into the cold outside, behind barriers set up in the hotel entrance.

Even those paying for rooms were told they “could not continue their professional activities” in the lobby area. If they ordered a $37 cheeseburger, however, and closed up their laptops they were welcome to stay put.

The hotel is no stranger to high-stakes diplomacy — it was here that Slobodan Milosevic was prodded into the Dayton accords in 1995.

And for many diplomats and journalists it was a case of deja-vu, for only a few weeks ago Kerry and Lavrov spent three days negotiating the Syrian chemical weapons deal, something the two men recalled at the top of their bilateral talks.

Kerry’s talks on Friday stretched almost to midnight, and he was up early Saturday for breakfast with EU foreign policy chief Catherine Ashton, who has been chairing the discussions.

From then on there was a whirlwind of meetings, as rumours began circulating of divisions between the French and other Europeans and the US.

In some surreal moments, dinner guests in ball gowns and tuxedos picked their way through the lounging reporters as they made their way to a benefit for a Greek charity.

“We have not yet managed to conclude (a deal), because there are still some questions remaining to be dealt with,” Fabius said.

All sides agreed however to meet again on November 20th, presumably in Geneva, when most likely the InterContinental will once again be the backdrop for what could be history in the making.