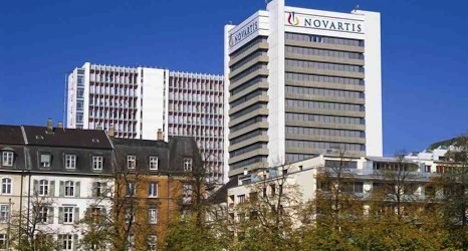 The division, which last year raked in sales of $565 million, joined the Novartis family in 2006 as part of the Swiss company's acquisition of US firm Chiron.

The sale, due to be completed in the first half of 2014, comes as Novartis undergoes an in depth review of its operations following the departure of long-time chairman and former chief executive Daniel Vassela.

"The sale of the Novartis blood transfusion diagnostics unit enables us to focus more sharply on our strategic businesses while providing Grifols with a platform for global expansion," Novartis chief Joseph Jimenez said in a statement.

The pharmaceutical industry as a whole is facing a number of significant challenges, including a wave of expiring patents and deep spending cuts in many public health sectors, forcing companies like Novartis to restructure and slim down.

Since Jörg Reinhardt took over as chairman in August, analysts have been speculating over which units might be the first to go, with the Vaccines and Diagnostics division and Animal Health unit among the most widely tipped.

Observers were quick Monday to hail the sale of the blood transfusion test unit.

Novartis has "stated that its businesses must have sufficient scale.

As this was certainly not the case with the blood transfusion business, the divestment makes perfect sense," J. Safra Sarasin analyst David Kaegli pointed out in a note.

"This first divestiture will fuel hopes of some investors that Novartis will divest more non-core businesses," he said.

"An established player in vaccines that already has critical mass should be able to relatively easily integrate this operation into its own business, creating significant synergies in the process," they said in a note, estimating that Novartis could pocket more than $6.0 billion on such a sale.

Last year, the Diagnostics and Vaccines division was the only one of Novartis's operations to finish in the red, posting an operational loss of $75 million.

"Grifols is the more logical owner and will be able to realize synergies with its large blood products business," he said.

The Barcelona-based company has seen its business boom in recent years and is currently the world's third largest producer of plasma-derived therapies.

The blood transfusion diagnostics unit it is purchasing is currently part of Novartis's vaccines and diagnostics division.

Headquartered in Emeryville, California, the unit provides a range of tests aimed at increasing transfusion safety by among other things detecting infectious diseases.

Another Novartis diagnostics unit that is part of the company's pharmaceutical business was not included in the sale.