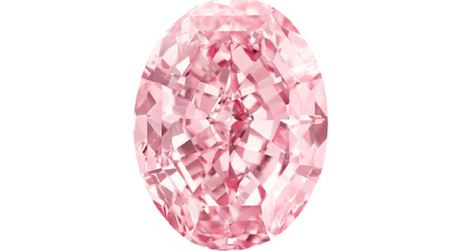 David Bennett, chairman of Sotheby's jewellery division in Europe and the Middle East, brought down the hammer in a Geneva hotel after an intense, five-minute bidding race.

The winning bidder, a bearded man apparently in his sixties sporting a Jewish skullcap, was pitted in a one-on-race against a telephone competitor.

The bidding in Geneva was conducted in Swiss francs, starting at 48 million and working its way upwards million-by-million.

There was a long silence as the price reached 67 million francs, before the in-room bidder came back with the winning 68 million.

Commission included, the final price was 76 million francs —  the equivalent of $83 million.

There were up to 150 people in the auction room who erupted into applause as the theme tune from the "Pink Panther" was played as a tongue-in-cheek gesture.

The winning bidder declined to identify himself to AFP but confirmed that he had been representing another individual, whose name and location he refused to reveal.

The diamond had been estimated at $60 million.

Three years ago, Sotheby's set an auction record of $46.2 million —  commission included — for a diamond when it sold the "Graff Pink" gemstone.

The Sotheby's auction comes a day after rival house Christie's sold an almond-shaped diamond dubbed "The Orange" for $31.5 million, also a record in its category.

"It's really extraordinarily rare," he said.

"Very, very few of these stones have ever appeared at auction."

The flawless 59.60-carat pink diamond is the largest in its class ever graded by the Gemological Institute of America (GIA), with the second biggest less than half its size, he said.

The sparkling oval-cut rock, which has received the highest possible GIA colour and clarity rating, was part of the auction house's "Magnificent Jewels" auction at the Beau-Rivage Hotel in Geneva.

Bennett had described the $60-million estimate as "very reasonable".

"The international demand for exceptional diamonds keeps on growing," he said.

Sotheby's David Bennett talks about the importance of the jewel: