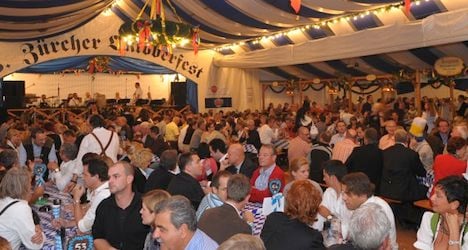 Six members of the squad are suspected of “passive bribery” after accepting an invitation to an Oktoberfest event last year from a business involved with prostitution.

The revelations, initially reported on Tuesday by the Neue Zürcher Zeitung (NZZ) newspaper, come on the heels of allegations made public last week against five city police officers, suspected of receiving sexual favours, food and drink from a “sex club” in return for confidential police information.

Nine other people were also arrested after a raid of Chilli’s hotel and nightclub in Zurich’s red light district.

The six other officers received their Oktoberfest invitation from Schweizer Degen, a restaurant, also in the red light district (Kreis 4), known for its role in the sex trade and often visited by the vice squad, NZZ said.

Prostitution is legal in Zurich but it is regulated, with requirements for work and residency permits for sex trade workers and restrictions on where they can carry out their activities.

The owner of Schweizer Degen, contacted by NZZ, declined to comment on the affair.

Marco Cortesi, spokesman for the city police force, attempted to minimize the case against the six officers, saying it involved a minor one-time violation of a regulation that requires officers to decline gifts with a value of more than 50 francs ($55).

The officers in question received vouchers that allowed them to receive food and drink worth 70 francs each, NZZ reported.

The two cases have implicated more than half the 17-person vice squad, including the deputy of the department.