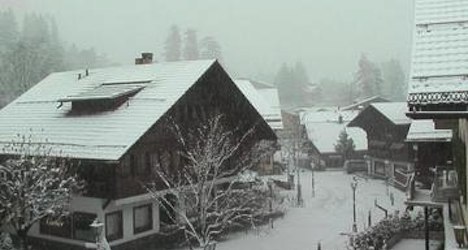 Gstaad-Saanenland on Thursday morning: the snowfall is not yet sufficient to open most ski resorts. Photo: Switzerland Tourism (Webcam)

The wintry conditions led to tailbacks on the A1 and A9 motorways and main roads around Lausanne, according to media reports.

The right lane of the A-1 was blocked for an hour between Winterthur and upper Matzingen in the direction of Saint Gallen on Thursday morning because of an accident in icy conditions, the Blick newspaper reported online.

Zurich is bracing for snow on Friday when more of the white stuff is forecast across the country, except for the valleys of Ticino, MeteoSwiss, the national weather service said.

Up to 15 centimetres is expected in areas of the canton of Zurich at an altitude between 600 and 800 metres.

Actual accumulations will depend on temperatures, which are hovering either side of zero in the valleys and on the plateau.

There is still not enough snow for most of the country’s ski resorts to open, although Switzerland Tourism said seven ski areas were open with limited lift services on Thursday.

At Zermatt, in the canton of Valais, 16 of the area’s 54 lifts were reported operating.

Other resorts with limited operations included Gstaad Mountain Rides (Glacier 3000) in the Bernese Oberland, Engelberg-Titlis and Rigi in Lucerne, and the Graubünden ski centres of Davos, Klosters and Engadin-St. Moritz.

Most ski resorts are not scheduled to start lifts running until the end of the month or in December.

However, Verbier in the canton of Valais announced it will open this weekend with a limited number of runs open, while Crans-Montana, also in Valais, is scheduled to start its season on Saturday.