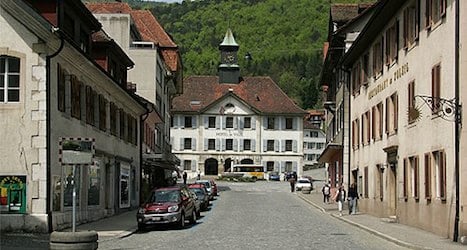 Around 72 percent of voters in the Bern areas voted against joining Jura, predominantly French-speaking and Catholic, according to results announced on Sunday.

Defenders of the annexation bid argued that these districts would be better represented than in Bern, which is largely German-speaking and protestant.

The argument failed to sway the majority except in Moutier, a town of 7,500 people on the Jura border, where 55 percent said yes to the initiative, which was also backed by 77 percent of voters in the canton of Jura itself.

“With this vote, Moutier has not become Jurassian but it is no longer a Bernese town,” Moutier’s Mayor Maxime Zuber said, according to a report from the ATS news agency.

And the Jura government has let it be known that it is supportive of the town joining the canton.

Elisabeth Baume-Schneider, a minister in the Jura cantonal government, noted the important differences between the vote in Moutier amd the rest of French-speaking Bern.

She said the government in Delémont, the Jurassian capital, is “ready to continue the process” of the town’s annexation to the canton, ATS reported.

That process would likely involve another vote.

But Christophe Neuhaus, the head of the cantonal government of Bern, said that a clear majority of people in the Bernese Jura area “feel good in the canton of Bern”, ATS quoted him as saying.

Located in the northwestern part of Switzerland Jura, with a population of 71,000, became a canton in 1979.

While it incorporates part of the Jura range of mountains, these actually spread over five Swiss cantons, including Vaud, Neuchâtel, Bern and Basel, as well as neighbouring France.