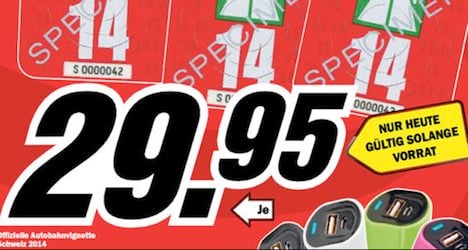 Long queues formed at the retailer’s 21 outlets around Switzerland after it put on sale the 40-franc “vignette” for 2014, needed to drive on motorways, for 29.95 francs.

Media Markt offered the deal two days after Swiss voters rejected a government proposal to raise the cost of the annual tax to 100 francs.

The chain certainly attracted customers with its one-day “loss leader” sale but officials from the Federal Customs Administration declared it illegal around lunchtime.

However, the sale of the vignettes continued with staff from Media Markt saying that for organizational and logistical reasons it was not possible to halt, according to an online report from the 20 Minuten newspaper.

Customs said the sale was illegal, not because of the price, but because the stickers were sold before December.

The regulation governing the motorway tax specifies that the sticker “can be sold or distributed on December 1st at the earliest before the year of taxation”.

A customs spokesman told 20 Minutes that motorists who bought the bargain-priced stickers do not risk any penalty.

However, Media Markt faces a sanction for violating federal law, although Customs has not specified what action it plans.

It it is not clear how many vignettes were sold but the retailer would not have made a direct profit from the sales, even if it succeeded in making a media splash with its action.

The chain bought its vignettes from the Touring Club Schweiz (TCS) but it paid the full price for them.

A TCS spokesman told 20 Minutes that it was normal for the motorists’ group to distribute the stickers to retailers in advance — but with the expectation that they would not go on sale until December 1st.