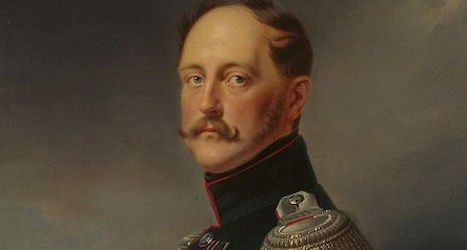 The December 9th Russian imperial sale is expected to rake in more than one million Swiss francs ($1.1 million), with the letters alone seen fetching 60,000-80,000 francs, Hôtel Des Ventes (HDV) said in a statement.

The letters, written in Russian, French and English, were purchased by an American captain and journalist deployed in Europe during World War II, "transport the reader right into the heart of Russian Imperial life and political intrigue," it said.

In 1989, the captain's widow gave the letters to a historian friend, without realizing what they contained.

Discovering that a number of the letters had been written by the tsars themselves, he quickly realized he was in possession of a historical treasure, explained Claire Piguet, HDV specialist on Russian imperial family manuscripts.

Most of the letters were addressed to Grand Duchess Olga Nicolaievna, the daughter of Nicholas I and sister of Alexander II, who moved to Stuttgart after marrying a German prince who would become King Charles I of Wurttemberg.

Through the missives, "intimate secrets and plots of the Russian Court are unveiled as well as the beliefs and political pains of the two emperors," HDV said.

The auction house will also sell an unpublished set of photographs of Alexander III's family which was rescued from the flames when the Nazis destroyed the Gatchina palace in 1944.

The snaps were rescued by Otto Hofmann, a German Bauhaus artist who was serving with the Nazi forces.

"Acting against martial law and putting his own life at risk, the soldier hid and brought back around 30 images which he considered historical evidence and culturally important for Imperial Russia," the auction house explained.

The family of Hofmann, who managed to hide the shots during several years as a prisoner of war, had decided to sell the pictures to "reveal his gesture to all," HDV said.

The auction house, which for years has been hosting a Russian imperial sale, will also be auctioning off a range of objects, including a rare pair of porcelain vases made in 1849 given by Nicolas I to his sister-in-law Elena Pavlona.

The vases, which are expected to fetch between 300,000-500,000 francs, were bought by a Swiss couple in Paris in the 1960s, and have been decorating their home in Geneva ever since.