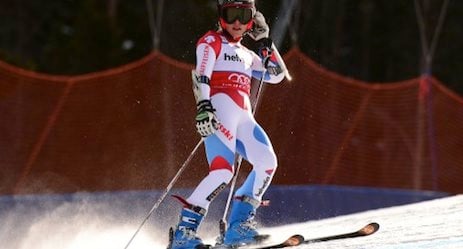 Gut had dominated the weekend, notching convincing victories in Friday's downhill and Saturday's super-G on the new Raptor course built for the 2015 World Championships.

But she was unable to add a second giant slalom race win to the one she captured in the season-opening race at Soelden, Austria, last month.

She slid off a steep turn of the Birds of Prey course on the first leg.

Sweden's Jessica Lindell-Vikarby emerged with the victory in the two-leg race ahead of American Mikaela Shiffrin.

"I just touched (the snow) with my boot," Gut said.

Despite that disappointment, Gut was delighted to come away from the weekend in the Colorado Rockies with 200 World Cup points.

"I knew that the week would be long here," she said of a stop in which the skiers were on the snow for six days.

"And when you win races you have a lot of things to do and I was a maybe a little bit tired today," Gut said.

"But that really is not an excuse," she said.

"I also could have won today."

Gut said she would try to build on her World Cup points total at next weeks' races in Lake Louise, Canada.

"It was a good opportunity to learn how to pace myself over these long weekends with three races," she said.

"But before that I'm going to rejoice at having two days of sleep because I've missed (many) hours of sleep."