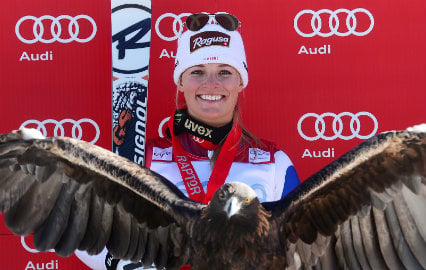 The 22-year-old again demonstrated her mastery of the new Raptor course built for the 2015 World Championships, clocking one minute 18.42 seconds for a dominant triumph a day after she won the first downhill of the season.

Austrian Elisabeth Goergl notched the second-quickest time of the day with 1:19.32, but the 2011 super-G world champion was disqualified from second place because of improper ski width.

Gut's victory came a day after she won the first downhill of the season, and she'll go for a sweep of all three Beaver Creek races in Sunday's giant slalom.

"It's two days that I'm skiing so fast," she said.

"There's another race tomorrow, I'll try to do it again."

Gut notched the sixth World Cup victory of her career and her third this season.

She opened the 2013-14 campaign with a giant slalom triumph in Sölden, Austria.

Gut delivered an attacking run but seemed to struggle to keep things together on the top part of the technically demanding course.

"Everything is going so fast when you're skiing super-G, so I can't really remember what happened," she said.

"I just tried to push on every gate, because it's a really challenging course . . . maybe I was pushing a bit too hard."

She smoothed it out on the lower section, saying she found her rhythm and was happy with the way she skied.

It all augurs well for Gut's Olympic bid in Sochi, Russia, in February, where she'll be aiming to erase the bitter memory of missing the 2010 Vancouver Games recovering from a hip injury.