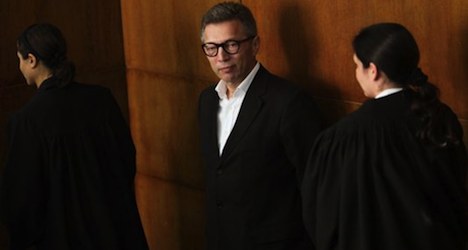 Gaydamak, 61, is also wanted in France for his role in the 1990s “Angolagate” affair, involving allegedly illegal arms sales to the African nation during its civil war.

His demand to be set free was refused, Geneva prosecutor Dario Zanni told the ATS news agency on Monday.

The tribunal ruled that he posed a major flight risk

The businessman is alleged to have not paid Luis Fernandez, a former French footballer and ex-manager of Paris Saint Germain, who coached the Israeli team from November 2005 to June 2006.

The payment was to have been made in Geneva but Fernandez maintains he never received the money, ATS reported.

Gaydamak’s lawyers, Marc Bonnant and Pierre-Damien Eggly, have declared that their client paid the 400,000 euros.

A resident of Russia, Gaydamak was in Zurich to discuss with lawyers a case related to the controversial sale of a phosphates factory in Kazakhstan.

He was arrested in the Swiss city ten days ago at the request of Geneva officials.

He was convicted more than three years ago, on appeal, to a 375,000-euro fine and three years in prison for tax fraud and money laundering in connection with “Angolagate”.