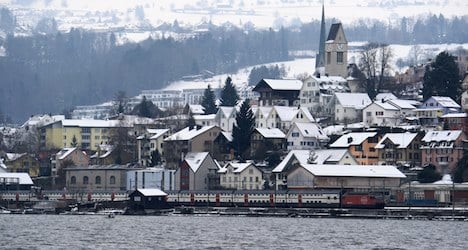 Wollerau in the canton of Schwyz. Photo: Wikimedia Commons

With a population of around 150,000 people, the canton counts 7,575 individuals with controllable assets of more than one million francs ($1.1 million).

The figures were highlighted in an online report published on Wednesday by the Blick newspaper, which noted that when it comes to taxpayers, one in 12 are millionaires in Schwyz.

From the available figures that makes it the canton with highest density of millionaires, although statistics are not publicly available from the cantons of Zug, Obwalden and Nidwalden, the newspaper said.

With ultra-low tax rates, Schwyz has attracted the likes of tennis star Roger Federer, who officially resides in the town of Wollerau, overlooking Lake Zurich.

Federer moved to the municipality from his home canton of Basel, reportedly to take advantage of the favorable tax advantages there.

He’s not the only wealthy personality in Schwyz, otherwise known for being one of Switzerland’s three founding cantons which formed an alliance more than 700 years ago.

Federer, ranked by Forbes as the second-highest paid athlete in the world with annual income of more than $70 million, joins 148 super-rich in the canton each with assets of more than 50 million francs, Blick said.

According to Blick, every municipality in Schwyz has at least one millionaire, except for Riemenstalden, a village with a population of 80.