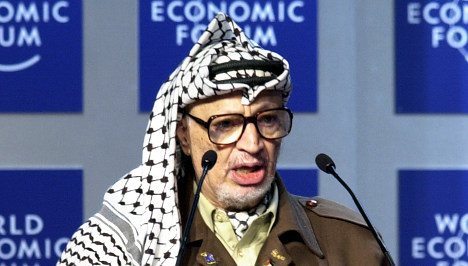 "Our data lean more towards the thesis of poisoning than in the opposite direction," Professor Francois Bochud, head of the Lausanne Institute of Applied Radiophysics, told AFP.

Bochud is the co-author of a report published last month that said the high levels of polonium — a rare and highly radioactive element — found in Arafat's remains and personal effects indicated third party involvement in his death.

An as-yet unpublished French report however rules out poisoning, a source close to the probe said this week, with an argument that the naturally occurring radioactive element radon, found in the ground, explained the high polonium levels.

Bochud, who has read the French report, stressed that the 107-page Swiss study had presented numerous arguments against that theory, the most compelling being that other remains exhumed from the same cemetery did not contain excessive levels of polonium.

Both the Swiss and the French experts thoroughly cleaned Arafat's bones to remove external contamination before carrying out their measurements, and proceeded to find identical levels of polonium, he pointed out.

"I have a hard time understanding why they, on one side say they have thoroughly cleaned the bones and eliminated contaminations, and at the same time explain their measurements with the very contamination they supposedly eliminated," he said.

"It's a bit difficult to follow their reasoning," he added.

The circumstances of Arafat's death aged 75 at a military hospital near Paris in November 2004 after a sudden deterioration in his health have long been mired in rumour and speculation.

France opened a formal murder inquiry in August 2012, a month after an documentary by the Al-Jazeera television network linked Arafat's death to polonium poisoning.

Some 60 samples were taken from his remains in November 2012 and divided between Swiss and Russian investigators and a French team carrying out a probe at his widow's request.

Many Palestinians believe he was poisoned by Israel — a claim repeatedly denied by the Jewish state.