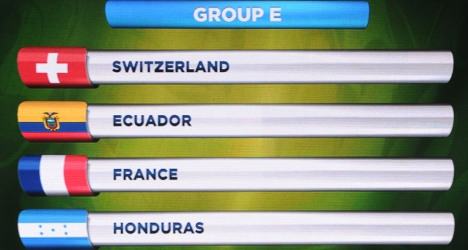 That may be premature but analysts say Switzerland has a good opportunity to advance from Group E against Ecuador, France and Honduras after avoiding a group with the world’s top teams.

The Swiss will first kick off against Ecuador on June 15th.

The Nati is then set to play France on June 20th and Honduras on June 25th.

Switzerland’s coach Ottmar Hitzfeld spoke prior to the draw of Switzerland being hugely fortunate to find themselves among the top seeds, Joe Wright, an editor with the website goal.com told The Local.

“Following events in Brazil on Friday, he can indeed count himself a little lucky,” Wright said.

“Undoubtedly the biggest test comes from France, who recaptured some of the spirit of their victorious 1998 campaign to reach the finals ahead of Ukraine,” Wright said.

“The two sides were pitted in Group G in the 2006 tournament in Germany, where Switzerland finished top of the group following a 0-0 draw against les Bleus — a game which they felt they should have won, in truth — and memories of their Stuttgart encounter will provide plenty of optimism for the Nati.”

Ultimately, the clash with Ecuador could well prove pivotal to Switzerland’s hopes of progression, Wright said.

“The South American nation will face little difficulty coping with the Brazilian climate, and impressive qualifying wins over Chile and Colombia proved they can match the very best on their day.”

Wright believes a place in the round of 16 is well within Switzerland’s reach.

“Hitzfeld made it clear he wishes to leave a legacy with Switzerland when he steps down after the tournament,” he said.

“The group stage draw has, on paper at least, made it possible.”

Here's a breakdown of the Swiss team, and their three opponents in the opening round of next summer's World Cup.

The Swiss qualified for the finals from probably the weakest European group, finishing top despite being held to draws by Cyprus and Iceland.

This will be their second World Cup finals under Hitzfeld — in 2010 in South Africa, they beat Spain in their opening game and yet failed to make it out of their group.

With a favourable draw, they will hope to progress this time, with Hitzfeld able to call on the likes of Napoli's Gokhan Inler and Xherdan Shaqiri of Bayern Munich.

After coming second behind reigning world and European champions Spain in their qualifying group, France seemed set to miss a major tournament finals for the first time in two decades when they lost 2-0 in Ukraine in the first leg of their play-off.

Failure would have been just the latest chapter in a rather gloomy recent history for Les Bleus, but a superb performance in a 3-0 second-leg victory booked their place in Brazil.

Deschamps, who captained France to glory at the 1998 World Cup and Euro 2000, must try to develop young talents such as Raphael Varane and Paul Pogba and get the best out of Franck Ribery and Karim Benzema.

However, France will settle for a respectable showing as they build towards Euro 2016, which they will host.

Ecuador qualified for their third World Cup finals after finishing ahead of Uruguay on goal difference to take the final automatic berth from South America.

However, while Reinaldo Rueda's side were excellent at home, they failed to win any of their qualifiers away from Quito, where the altitude gives them a huge advantage.

They were also shaken by the sudden death of striker Chucho Benitez in July, but they will go to Brazil with a squad captained by Manchester United winger Antonio Valencia and featuring powerful forward Felipe Caicedo. Coach Rueda is a Colombian who took
Honduras to the 2010 World Cup finals.

Honduras finished four points ahead of Mexico to take the final automatic qualifying berth in the CONCACAF zone after a campaign which featured a win away to the Mexicans at the Azteca stadium.

The Central American nation of just over eight million people are through to their third World Cup finals, and second in a row, with Suarez following in the footsteps of his fellow Colombian Reinaldo Rueda, who took 'Los Catrachos' to South Africa in 2010.

The squad features a handful of European-based players, such as Celtic left-back Emilio Izaguirre and Wilson Palacios of Stoke City.