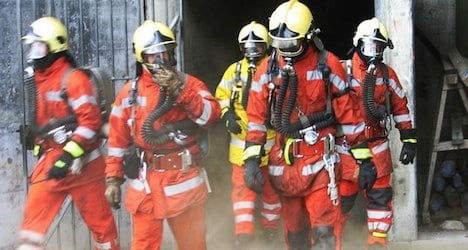 The fire broke out around 6pm in the attic of a building on the Augustinerasse sending thick plumes of smoke into the air, according to an online report from Blick.ch.

Around fire fighters responded t the blaze and quickly brought it under control, the news site said.

The incident occurred just steps away from Zurich’s fashionable shopping precinct on the Banhofstrasse.

Fire officials said quelling the fire was complicated because the roof had to be opened up.

Two levels of the affected building were reduced to ashes, 20 Minuten reported.

However, residents in adjacent buildings did not have to be evacuated, the tabloid said.

Meanwhile, 100 firefighters responded to a blaze at a warehouse containing wine in Geneva early Thursday morning.

The Tribune de Genève newspaper quoted the building manager saying it would cost 500,000 francs to repair the damage to the building at 110 rue de Lyon.

Lilia Waizenneger, the owner of a business that imports and sells Israeli wine and kosher food items, told the newspaper she lost all her stock in the fire.

"in this (Christmas) period, customers are making lots of orders," she said.

"And here everything is burned — I no longer have anything."