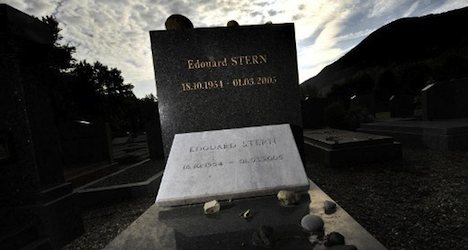 "It is obvious that every second of my life that goes by I regret, and will eternally regret my action," Cécile Brossard, 43, wrote in a letter read aloud during the show dedicated to the murder on Swiss public television station RTS.

It was the first time Brossard, who was found guilty in 2009 by a Geneva court of Edouard Stern's murder, has said anything publicly about the crime.

"I wasn't in a state where I could think . . . everything just exploded inside me," she said of the moment she shot Stern, one of France's wealthiest men and a personal friend of former president Nicolas Sarkozy.

She said she had decided to come forth to talk about "the real Edouard", whose name had been dragged through the mud during her trial that exposed lurid details about their four-year relationship and a tale of sex, power and money.

"Edouard had a beautiful spirit," she wrote in the letter, read out by a television presenter, as she did not wish to appear in person on the programme.

Brossard was handed an eight-and-a-half year sentence for manslaughter, but since she had served more than four years on remand before her trial, she qualified for early release in November 2010.

She has confessed to shooting Stern four times in his Geneva penthouse flat on February 28th 2005, leaving his latex-clad body to be found there the next day.

Brossard's lawyers argued she snapped under the pressure of a tormented four-year relationship with Stern, whom they portrayed as a "narcissistic pervert" and deeply manipulative.

Prosecutors and attorneys for Stern's family had alleged instead that Brossard was cynically motivated by greed and the prospect of a one million dollar payment he had made to her but later froze.

In Wednesday's letter, Brossard herself insisted she missed her lover, who had "a lovely and luminous personality."

"Life without Edouard is not the same as life with Edouard," she wrote.