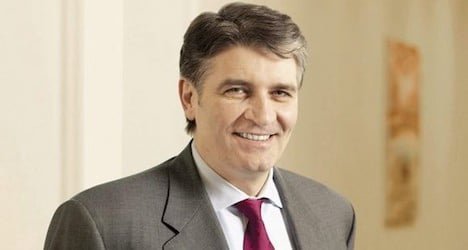 Raoul Weil, 54, was extradited earlier this month, five years after his indictment by a federal grand jury in 2008 for his alleged role in overseeing cross-border business.

The Swiss national was arrested in mid-October after using his real name to check into a luxury hotel in Bologna.

He has denied the allegations against him.

“Mr Weil is pleased finally to begin the process of defending himself,” his lawyer Aaron Marcu told AFP.

“He has consistently denied doing or knowing of anything unlawful, and we look forward to the opportunity to present his case in court.”

Weil is expected to appear in court in Fort Lauderdale, Florida.

He arrived in the United States on Friday.

The indictment against him alleges that Weil, who between 2002 and 2007 supervised UBS’s overseas activities, and co-conspirators helped US customers conceal about $20 billion in assets from tax authorities.

Swiss banks are believed to have accepted tens of billions of undeclared dollars from US citizens, though they now refuse such money, and a number of banks are under US investigation.

Weil, who left UBS in 2009, has been relieved of the chief executive position he has held at Swiss wealth management firm Reuss Private Group since the beginning of the year.