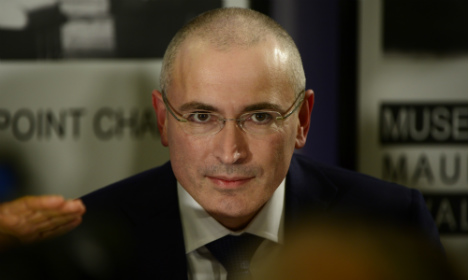 Khodorkovsky was freed from a Russian prison last week after a decade in jail, and filed a visa request at the embassy.

The announcement was made in a brief statement from the embassy that gave no further information on privacy grounds.

"Switzerland has granted the request of Mikhail Khodorkovsky for a Schengen visa. The visa allows a three-month stay in the Schengen area," said the statement, referring to a 26-country visa-free zone within the EU.

A spokesman for Khodorkovsky said: "He is very grateful to the Swiss authorities for the speed and efficiency with which they have dealt with his visa application.

"So soon after his decade of unjust imprisonment, Mr Khodorkovsky is delighted that Switzerland will be the second country in which he can breathe the air of freedom," he said in a statement on Khodorkovsky's website.

The former oligarch had travelled straight to Germany after a surprise pardon from President Vladimir Putin last Friday. Khodorkovsky's twin sons go to school in Switzerland.

Putin surprised Russia on Thursday by announcing he would pardon Khodorkovsky, who was jailed for financial crimes in separate convictions in 2005 and 2010.

He had served time in Siberia and the region of Karelia close to the Finnish border and had been due for release in August 2014.

Russian investigators had earlier raised the prospect of a third criminal case against the Kremlin critic.

Swiss media say Khodorkovsky – once the richest man in Russia – has part of his fortune in Switzerland.

Following a request for judicial assistance from Russia in 2004 the Office of the Attorney General of Switzerland froze 6.2 billion Swiss francs belonging to the oligarch's Yukos oil company.

The money was held in five banks in Switzerland, the Tages-Anzeiger newspaper reported.

Khodorkovsky filed a complaint against the freezing of the funds and the Russian request was finally rejected in 2007.