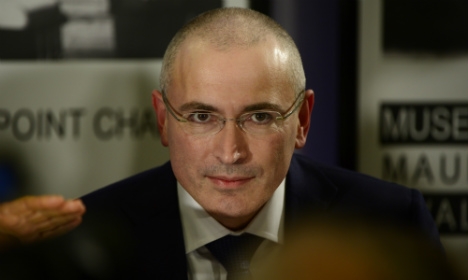 "You can't live with peace of mind when you know there are political detainees rotting in prison," Khodorkovsky told Swiss public television SRF on the train that took him from Berlin to Basel.

A spokeswoman for the man who was Russia's most famous prisoner until his release on December 20th said he had travelled to Switzerland with his wife to take their sons back to school.

"He is in Switzerland, where his children go to school," she told AFP, refusing to reveal which city Khodorkovsky would travel to next.

SRF reported that the Kremlin critic arrived at the train station in Basel at 6:54pm accompanied by his wife Inna, his daughter Nastia and twin sons Gleb and Ilja.

The 50-year-old had stayed in Germany since his release.

"Both of my youngest sons go to school in Switzerland, and their lessons will soon start up again," he told the broadcaster on the train.

It remains unclear where exactly in Switzerland Khodorkovsky's wife and twin sons live, with a number of possible locations floated in the media in recent days.

The latest report in Swiss outlets suggested the family was based in Chernex, in the municipality of Montreux, overlooking Lake Geneva.

Bern said Monday it had granted a three-month visa to the Kremlin critic, who was jailed for ten years for financial crimes but last month pardoned by Russian President Vladimir Putin.

Khodorkovsky's supporters say the imprisonment was Putin's revenge against the former oil tycoon who financed the political opposition and openly criticized the Russian leader.

In a statement Sunday, Khodorkovsky's spokespeople said he was "delighted that Switzerland is the second country in which he can breathe the air of freedom".

"Mr Khodorkovsky and his family are thankful to Switzerland for providing this opportunity, and will appreciate the time and space to cherish this special time together," it added.

Russia's one-time richest man, who has said he would stay away from his home country and pledged not to seek revenge against Putin, argued that the struggle for the rights of political prisoners was not a political one.

"I think that working to free people unjustly imprisoned is the duty of every citizen," he told SRF.

"This has nothing to do with politics."

The statement on his website Sunday stressed however that he "has not yet made any plans about permanent residency in Switzerland or anywhere else".

That statement hailed Switzerland for its "principled positions taken . . . over the many years of his unjust imprisonment."

"The Swiss judicial authorities were quick to recognize the politicized nature of Mr Khodorkovsky's prosecution," it added.