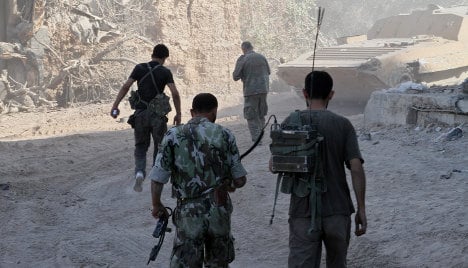 "We can confirm that our personnel who have disappeared are expatriates of Belgian, Danish, Peruvian, Swedish and Swiss nationalities," an MSF spokeswoman said in a brief statement to AFP in Paris.

The organisation has been extremely spare in information provided on the employees, who were taken Thursday night from a house they were using in war-ravaged Syria.

"In difficult moments, discretion is crucial for the security of our colleagues," the spokeswoman said.

Earlier, spokespeople from the organisation's various chapters in Europe confirmed that MSF employees had been taken, but declined to provide any further information, including ages and whether they were men or women.

Belgian Foreign Minister Didier Reynders however told broadcaster RTL-TV that the Belgian national was a nurse in his 30s.

He emphasised though that it had not yet been established that the five had been kidnapped.

"We do not have confirmation from other sources (besides MSF), so I want to make clear that I'm talking only about a possible kidnapping," he said.

It remained unclear who had taken the MSF staff and the organisation has so far refused to provide the exact location of the house they were taken from.

"We are still trying to analyse the situation and see what we can do to help our colleagues," said MSF Switzerland spokeswoman Sibylle Berger said, explaining why the organisation was being so tight-lipped,

In a statement Friday, the organisation said only that the five had been taken "apparently for questioning".

"MSF is in contact with all the appropriate actors as well as the families of the colleagues and is doing everything possible to reestablish contact with these colleagues," spokeswoman Samantha Maurin said in that statement.

MSF has six hospitals and four health centres in northern Syria and provides health support from neighbouring countries to within Syria as well as to Syrian refugees.

In September 2013, a Syrian surgeon working for the group was killed in the north of the country, and aid workers operating in rebel-held parts of Syria have faced detention and kidnappings.

In October, seven employees of the International Committee of the Red Cross were kidnapped in northwestern Idlib province, with a Syrian NGO blaming the abduction on the Al-Qaeda-linked Islamic State of Iraq and the Levant.

ISIL has been accused of targeting both foreign and Syrian journalists as well as aid workers and activists for kidnapping.

Syrian rebels have in recent days declared war on ISIL, accusing the group of imposing a reign of terror on areas under its control.