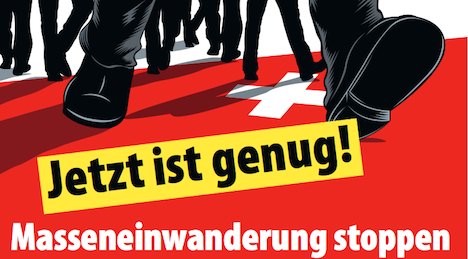 Passing the "Stop Mass Immigration" proposal in a referendum on February 9th would be a big mistake, hitting a swathe of sectors that rely on foreign labour, a 12-organization coalition warned.

A recent poll showed that 36 percent of voters oppose the measure, down from 52 percent in October.

The organizations also included the Economiesuisse business umbrella body, and those representing independent artisans, farmers, watchmakers, plus the hotel, insurance, machine and textile sectors, hospitals and the science and IT industries.

The proposal is the brainchild of the Swiss People's Party, the largest in parliament.

It claims Switzerland has lost control of its immigration rules, with allegedly disastrous results for the economy and society such as undercutting local workers, driving up rents and land prices, and overburdening the health and education systems.

"They refuse to discuss the social and economic problems caused by the annual arrival of 80,000 new residents," it said.

"Switzerland must be able to decide for itself who can move here and when they should leave," it added, underlining that it did not oppose immigration as such.

Switzerland's cross-party government and parliament have rejected the plan, arguing that foreign workers have long been crucial to the economy of one of the world's wealthiest nations.

Under Switzerland's system of direct democracy, the people have the final
say in plebiscites on a host of issues.

Almost two million of the eight million people currently living in Switzerland are non-Swiss — 3.3 percent more than in 2012, according to official data.

The highest numbers of recent immigrants come from EU nations such as Portugal, Germany, Italy and France.

Switzerland is not an EU member but has tight economic ties with the 28-nation bloc.

It axed immigration quotas for EU citizens in 2007, giving them equal footing on the job market as part of a raft of accords with Brussels.

The proposal calls for the quotas to be reimposed, raising the spectre of a clash with Brussels because it sets a three-year deadline for the rules to be renegotiated.