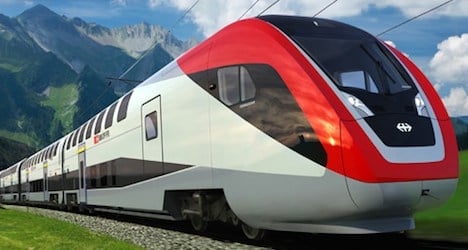 Rendering of what the new trains will look like. Photo: SBB

The state-owned rail operator was originally set to take delivery of the first double-decker trains at the end of 2013 in the largest such order it has ever made, valued at 1.9 billion francs ($2.1 billion).

This was postponed to 2015 but now Andreas Meyer, SBB’s CEO acknowledges even that date may not be met, with no firm deadline yet in place.

“Bombardier has serious problems in the design and manufacture of the trains,” Meyer told weekly newspaper SonntagsBlick.

Part of the delay is down to design changes requested by SBB to ensure the trains could travel faster than 200 kilometres an hour, the newspaper reported.

Bombardier Transportation Switzerland, a subsidiary of its Canadian parent, beat German company Siemens and Swiss firm Stadler to scoop the contract in 2010 with the lowest priced bid and one that promised the widest carriages and the most seats.

The first of the trains was originally scheduled to be launched on the St. Gallen–Zurich–Berne–Geneva and Romanshorn–Zurich–Berne–Brig routes, with others to be rolled out over a six-year period.

Meyer said SBB is not considering withdrawing the contract but he told SonntagsBlick that if the trains are not put on the rails “we will have to look at other alternatives”.

The newspaper noted that SBB is already using rolling stock originally ordered for local service around Zurich for longer routes.

With congestion a problem on many routes in peak periods, SBB has said it needs to add 120,000 seats on its long-distance services by 2030, while old trains with carriages that lack air conditioning must be replaced.

Billions of francs in infrastructure are also required to expand capacity.