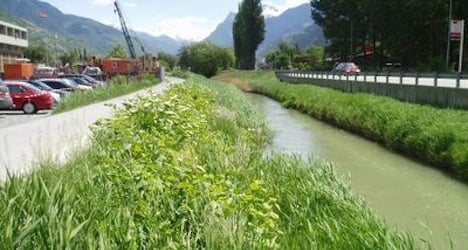 A section of the Grossgrundkanal. Photo: Canton of Valais

The metal was dumped along with other industrial waste into an 11-kilometre-long canal by the Lonza chemical company between 1930 and 1970 and has subsequently found its way into adjacent land.

Ten parcels of land — more than a quarter of the 36 plots analyzed so far — have levels of mercury that exceed five milligrams per kilogram of soil, the canton’s service for the protection of the environment said on Tuesday.

In some places the level reached 83 milligrams.

A further 50 parcels of land have yet to be checked, the head of the environment protection service Cédric Arnold told a press conference, the ATS news agency reported.

A clean-up programme is planned for the polluted land.

The canton, meanwhile, has issued a ban on planting fruits and vegetables on the 10 properties, which are also off-limits as play areas for children.

A recommendation has been made to adopt the same policy on 14 other parcels with lesser levels of mercury pollution.

The danger for public health is negligible because the mercury is in liquid form, ATS quoted cantonal doctor Christian Ambord as saying.

Mercury poses a danger when it transforms into a gas because it can then be absorbed by micro-organisms in aquatic areas and subsequently eaten by fish, Ambord said.

Up to now, there have been no reported cases of mercury poisoning in the town located in the Rhone Valley north of Zermatt.

Lonza used the Grossgrundkanal to discharge industrial waste, including 4.5 tonnes of mercury, a practice it has subsequently abandoned.

Sediments from the canal were dredged and deposited on land zoned for housing, leading to the mercury contamination.