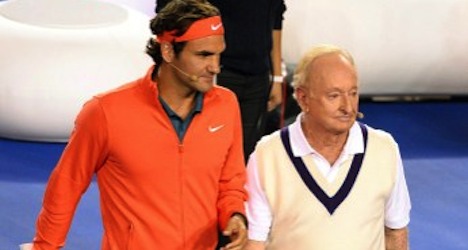 The 75-year-old took to the Melbourne Park court named in his honour wearing a vest, shorts and tennis shoes. He briefly traded shots with Federer before the Swiss player took on Frenchman Jo-Wilfried Tsonga in an exhibition match.

Federer admitted he was nervous about rallying with Laver.

"The racquet feels a little heavy right now, I must say," he said.

The 32-year-old Swiss famously showed his deep respect for the Australian when he burst into tears after winning the 2006 Australian Open, with Laver watching on the winner's dais.

Wednesday's exhibition match at the Rod Laver Arena was organized by Federer to raise money for his foundation, which supports education for underprivileged children in southern Africa.