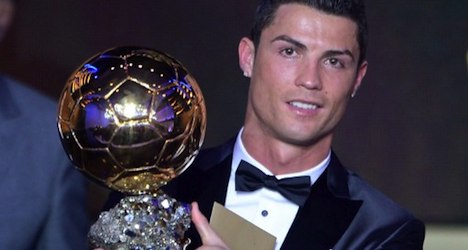 The tearful 28-year-old Real Madrid and Portugal star, who won the award in 2008, had been the overwhelming favourite to pip Barcelona and Argentina wonder Messi, winner the previous four years, and France's Franck Ribéry, who claimed the treble with Bayern Munich in 2013.

"There are no words to describe how I feel," said Ronaldo.

"I'm delighted, I want to thank all my team-mates, all my family in the room.

"Those who know me know how many sacrifices I made to win this reward.

"The only thing I wish to say is that this Ballon d'Or is justified to be for Cristiano Ronaldo, it is recognition of hard work, talent, and a desire to win daily."

"I would have loved to have won, but as it is the motivation is the same to keep growing, improving and winning things," he commented via Barcelona's twitter page.

However, UEFA President and French football icon Michel Platini found it strange that Ribéry should miss out in a year that he helped Bayern carry all before them.

Indeed Platini, who won the Ballon d'Or three times, said the nature of the award had changed since it fell under FIFA's aegis in 2010.

"I am very disappointed for Franck Ribéry," he said.

"Next year we will return and it will be Messi-Ronaldo, in two years time the same and three years time ditto," Platini said.

"I am disappointed because for 50 years the Ballon d'Or took into account results and trophies on the pitch.

"Here we are talking about the global value of players and that poses a problem."

News of Ronaldo's success filtered through from France Football just moments before the official announcement in Zurich.

Ronaldo, who was widely expected to win after news spread on social media earlier in the day that seven members of his family were joining him in Zurich and his club Real were transmitting the award ceremony live on their official television channel in a change to the programmed schedule, broke down in tears on stage during his victory speech.

Ribéry, who won the Champions League, Bundesliga and German Cup with Bayern last season, before adding the European Supercup and Club World Cup before the turn of the year, had been the early front-runner.

But a controversial two-week extension to the voting deadline for international coaches, captains and media meant those casting their ballots could take into consideration Ronaldo's remarkable hat-trick to beat Sweden in
the World Cup play-offs in November.

That was widely believed to have been enough to tip the scales in his favour.

However, with 66 goals in his 56 matches this year — more than Messi and Ribéry's combined 65 — no-one could deny Ronaldo was a worthy winner.

It is the second time he has picked up the award and comes in a season in which he won nothing with either club or country, an unusual situation for a Ballon d'Or winner.

In 1982 Italy's World Cup hero Paolo Rossi won despite a non-descript year away from his heroics in Spain.

And in 2001 England and Liverpool's Michael Owen was a controversial winner after enjoying a great season in the cups with the Reds, winning the UEFA Cup, FA Cup and League Cup.

As expected, Bayern's Jupp Heynckes, who retired following their historic treble in May, won the coach's award.

A special honorary Ballon d'Or was given to Brazilian legend Pelé, who never qualified for the award during his playing career as he never plied his trade in European club football.

From its inception in 1956 until 2010, the Ballon d'Or was awarded to the best player in Europe and the FIFA World Player of the Year award was only inaugurated in 1991, before ending in 2009 when it was assimilated into the Ballon d'Or.

Zlatan Ibrahimovic won the Ferenc Puskas best goal award for his stunning, acrobatic overhead kick from 40 yards for Sweden in a friendly against England.

Former IOC president Jacques Rogge was given the president's prize for a "remarkable personality in sport".

In the team of the year, Bayern's goalkeeper Manuel Neuer, full-back and captain Philipp Lahm and Ribery were joined by Barcelona's right-back Dani Alves, midfielders Andres Iniesta and Xavi and Messi, as well as Ronaldo and
his Real team-mate centre-back Sergio Ramos, and Paris Saint-Germain pair Ibrahimovic and centre-back Thiago Silva.