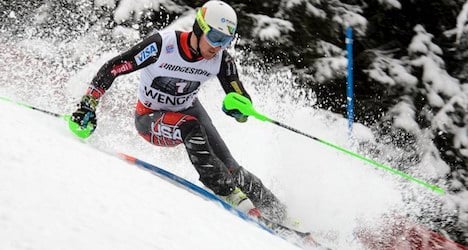 Ligety, the 2006 Olympic and 2013 world gold medallist in the discipline, clocked a combined total of two minutes 44.74 seconds over a slalom and downhill, their running order reversed because of intermittent morning snow.

France's Alexis Pinturault, who topped the standings after the slalom leg, came second 0.22 seconds behind, with Croatia's Natko Zrnic-Dim in third (1.08 seconds after).

"It's good to get this win, definitely. Hopefully it will change the momentum for me," said Ligety.

"I've finally won a combined. I've won the Olympics and world championships but I haven't won a World Cup before and it's nice to get that."

This season has so far been mixed results-wise for Ligety, the Park City skier winning the giant slalom in Soelden and Beaver Creek and claiming a third in Altabadia, but bombing out of both the slalom and giant slalom in Adelboden and Val d'Isère, and also the super-Gs in Lake Louise and Val Gardena.

His recent form in the technical events was something he claimed hinged more on bad luck than his skiing.

And while he was left less then pleased with his slalom run, he felt he did his talking in the downhill.

"I thought I should have been closer (to Pinturault) in the slalom," he said.

"In the downhill, I was motivated to go hard, I'm not preserving myself to stay alive. I can be fast sometimes."

Pinturault was left disappointed with his second place.

"There's without doubt some disappointment, especially when it comes down to 20-hundredths of a second, it's a not a great deal," the 22-year-old said.

"I knew Ted was capable of making up the gap on me in the downhill and that was confirmed today."

Pinturault added: "Still, it's a second place, it's very good. I don't think I lost a victory, but Ted really won one.

"I didn't make any big mistakes, he was better than me."

With the smells of roasting chestnuts and melting raclette cheese wafting around the finish area, the partisan, cowbell-ringing crowd were left roaring when local Sandro Viletta took the lead.

He eventually finished 1.38 seconds off the podium in fourth, while highly-fancied American Bode Miller came in ninth 2.15 seconds behind.

Ligety consolidated his third place (433 points), 27 ahead of Pinturault.