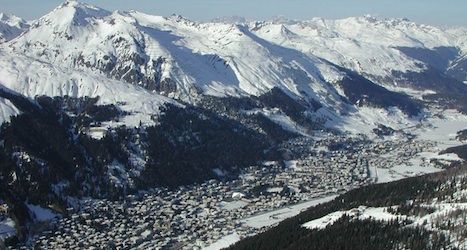 Iranian President Hassan Rouhani tops the bill of more than 40 leaders and 2,000 of the world's most powerful economic players expected at the mountainside gathering in the annual shindig that starts on Tuesday.

In what has become a tradition of its own at the World Economic Forum, burning issues other than the world economy will likely exercise the minds of the global elite during their five-day-long programme of seminars and debates.

This year, looming over proceedings will be the long-awaited Geneva II peace talks aimed at ending the three-year bloodbath in Syria which will take place at the same time in the Swiss town of Montreux.

The most eagerly awaited guest at Davos this year is Rouhani, there to drum up international investment for his sanction-hit economy on the back of a diplomatic entente with the West.

And in one of the unlikely juxtapositions only the Davos schedule can throw up, speaking the same day will be Benjamin Netanyahu, prime minister of sworn enemy Israel.

Although the two are not scheduled to meet, anything is possible in the cushy conference corridors where leaders move freely among top bosses, Hollywood stars and Nobel Prize winners.

Last-minute guest John Kerry, US Secretary of State, is scheduled to give a key address on Friday, fresh from the talks in Montreux.

On the economic front, the plight of emerging economies hit by a change in monetary policy in the US will play a major role in the conference deliberations.

President Dilma Rousseff of Brazil, where the economy took a sharp turn for the worse last year, will defend the state of her nation, now battling inflation and slow growth.

Geopolitics will dominate the visit by Japanese Prime Minister Shinzo Abe, who instead of talking up reforms that are turning around years of economic gloom, will likely face questions over tensions with China.

Anger has surged between the two Asian powers, focused mainly on contested islands in the East China Sea, which has helped drag up old animosities dating back to the Second World War.

As usual, a slew of central bankers and top economic policymakers will make the trek up the mountain, with the European Central Bank President Mario Draghi set to forecast the state of the economy with Mark Carney, the Canadian now running the Bank of England.

International Monetary Fund head Christine Lagarde will also address the forum, along with a plethora of finance ministers from around the world.

On the business side, Yahoo! Chief Executive Marissa Mayer will feature prominently as will Facebook number two Sheryl Sandberg.

But Davos would not be Davos with the presence of celebs and rockers adding some sparkle and providing a counterbalance to the weighty topics being thrashed out in the conference halls.

And the official programme is often not even half the story as much of the real business gets done over champagne, cocktails and canapes in the plush hotels of the stunning town that for one week only basks in the global spotlight.

Deals worth millions are struck at private soirees and many believe political agreements are hatched here as leaders huddle together in a more relaxed and informal setting.

And in case the heady mix of high-powered wheeling and dealing and hard core economic theory gets too much for the global elite, sessions are also scheduled on meditation, gaming and "the importance of being happy"