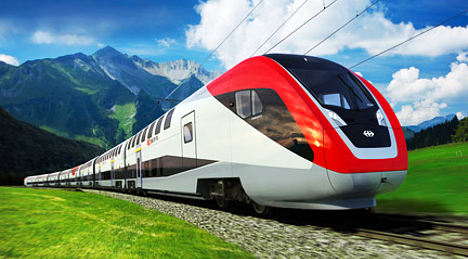 Rundschau, a public affairs program on German-language TV channel SRF, broadcast a report on Wednesday night about what it called the “debacle” over the new long-distance passenger trains, commissioned by SBB for 1.9 billion francs ($2.1 billion).

The program said that Bombardier is seeking the extensive damages from SBB for having interrupted the contractual operation of the contract to build 59 train sets by “unacceptable interventions” in the design process.

Earlier this month, SBB’s CEO Andreas Meyer acknowledged there was now no firm date for the delivery of the first trains, which were initially expected by the end of 2013, a date that was postponed by two years.

“Bombardier has serious problems in the design and the manufacture of the trains,” Meyer told weekly newspaper SonntagsBlick.

SBB spokesman Stephan Wehrle on Thursday confirmed to the ATS news agency that the rail operator was aware of Bombardier’s claim for damages but it maintains it is unfounded.

“The fact is we are collaborating with Bombardier and that we are trying to get the trains into operation as soon as possible,” Wehrle is quoted as saying.

He said SBB is still waiting for a firm delivery date from the Canadian-owned company, which is a source of concern.

But Wehrle noted the contract with Bombardier contains clauses that call for penalties for missed deadlines that could mount quickly into the hundreds of millions of francs, ATS reported.