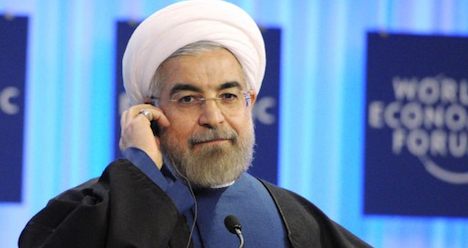 On a visit to the Swiss resort aimed at enticing international investors back to Iran, President Hassan Rouhani told the World Economic Forum his government was sincere in its desire for a new relationship based on mutual trust and a rebuilding of economic ties that have been shattered by international sanctions.

Israeli Prime Minister Benjamin Netanyahu, also speaking at the prestigious gathering, warned the West not to take the media-friendly Iranian's offer at face value, insisting there was no concrete evidence of any fundamental change in the nature of the Islamic regime.

"Hassan Rouhani can say something but it doesn't make it real," Netanyahu said.

He said the Iranian president's claim that Tehran wanted to promote stability and security in the Middle East had "no connection with what is going on on the ground," notably in Syria, where he said Iranian Revolutionary Guards and its Hezbollah allies were fighting and killing alongside government forces.

Rouhani was making his first international outing since he created a stir at the United Nations in New York in September by outlining his new government's desire for a fresh start in relations with the US and other Western powers.

In his speech, described as a message of friendship and hope by the Forum organizers, he unveiled a proposal to create a new multilateral body tasked with stabilising global energy supplies.

Rouhani said Tehran was ready to put some of its extensive oil and gas reserves at the disposal of the proposed new body.

"We are prepared to engage in a serious process to establish a reliable institution for this long-term partnership," he said.

Iran's oil exports are currently running at around half the level of a decade ago as a result of EU and US sanctions applied over Tehran's suspected attempts to develop nuclear weapons.

An agreement on a modest easing of the sanctions took effect this week in line with an interim accord on Iran's nuclear capacity agreed between Tehran and major world powers in November.

The interim agreement is intended to pave the way for a fuller accord and a further lifting of sanctions.

Iran is already seeking to persuade oil majors to start planning for a resumption of investment in the country but hopes of quick progress were dampened by a warning from US Treasury Secretary Jack Lew, who played down the significance of the limited easing of sanctions so far and warned companies they could find themselves on the wrong side of US law.

"At the same time, the core architecture remains in place — the financial sanctions and the oil sanctions.

"I've been very clear with businesses in the United States and internationally that they should be very clear-headed as they think about going to do business in Iran now because the sanctions regime has not been removed."

In his speech, Rouhani described the nuclear accord, which limits his country's ability to enrich uranium and provides for inspections of its facilities, as marking the start of a new phase in relations with the United States.

He said Iran believed a full deal was achievable but also reiterated that the regime would never give up its right to join some 40 other countries in acquiring the capacity to generate nuclear power and use nuclear technology for other peaceful ends.

"We have never sought anything other than peaceful use of nuclear technology and we will not accept obstacles being put in the way of our scientific progress," he said.

In an apparent reference to Israel, Rouhani said he saw the major impediment to a full nuclear accord as "a lack of serious will by other parties or pressure influenced by others".

Israel believes Iran remains dangerously close to the capacity to build a nuclear missile which would threaten the Jewish state's existence.

Netanyahu, who delivered a speech on the role of innovation in the Israeli economy, denounced Rouhani's latest charm offensive as a typical piece of "deception."

"The goal of the ayatollahs' regime, which is hiding behind Rouhani's smiles, is to ease sanctions without conceding on their programme to produce nuclear weapons."