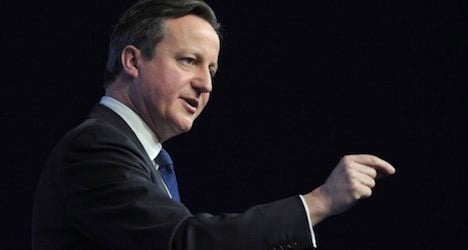 In a speech to the World Economic Forum in the Swiss mountain town, Cameron said that Britain was determined to capitalize on its economic reforms and open markets to become a "reshore nation."

Buoyed by signs that the British economy is enjoying a stronger economic recovery than had been anticipated a year ago, Cameron claimed his government's business friendly policies lay behind the "small but discernible trend" of jobs returning to Britain from emerging economies.

Other European countries could reap a similar dividend, but only if they embrace deregulation, make themselves attractive for foreign investors and make the right decisions, most importantly on the future of shale gas, Cameron said.

The United States' decision to embrace drilling for gas reserves trapped deep below the earth's surface has been credited with slashing energy prices there and the resulting reduction in companies' costs is driving a wave of manufacturing jobs reshoring from overseas.

Britain is seeking to follow suit but individual drilling projects have faced fierce local objections and other European countries, most notably France, have banned even exploratory projects because of concerns over the potential environmental impact.

Cameron rejected what he described as the "dystopian vision" of economic development under which "the East wins while the West loses."

He said the reshoring trend was being driven primarily by rising costs in developing countries, but argued that companies were also realizing there were advantages to having shorter supply chains — in sectors such as fashion notably — and being able to provide better customer service for after-sales and other call-centre services.

Cameron highlighted a survey of small and medium-sized businesses, which found that one in ten brought back to Britain some production in the past year, twice as many as outsourced it in the opposite direction.

Among examples he cited were Hornby, the famous toy train manufacturer which is relocating some production from India back to Britain, and Raspberry Pi computers, which recently moved its manufacturing from China to Wales.

Britain's economy has defied predictions that the deficit-slashing austerity policies of Cameron's government would slow recovery and the IMF this week raised its forecast for 2014 growth from 1.9 to 2.4 percent, the biggest upgrade of any G7 economy.

Cameron also trumpeted a survey by global accountants Ernst and Young which rated Britain the best place for entrepreneurs and recent figures on foreign investment in the economy.

"Rather than trying to pull up the drawbridge and shut ourselves off from globalization, we have chosen to embrace foreign investment," Cameron said.

"We are proud of the Indian investment in Jaguar Land Rover, proud that the Chinese are investing in our nuclear industry and proud that in the first half of last year the UK became the world's largest recipient of inward foreign direct investment."

Critics of the British economic model argue that the apparent dynamism is illusory with much of the recent recovery being driven by an emerging bubble in the property market and trade unions says four out of five new jobs being created are in low-paid sectors.

Long-term problems of relatively low investment levels, crumbling infrastructure, poor public services and chronic imbalance between London and the rest of the country are also highlighted by those who say everything in Britain is not as rosy as depicted by Cameron.

The premier also had to fend off accusations of hypocrisy from some of his audience here, with one questioner asking how he reconciled his belief in open markets with support for curbs on migration within the European Union.

Britain has recent announced plans to restrict the access of newly arrived migrants to welfare benefits and is seeking a review of the rules on migration ahead of any further expansion of the 28-member EU.

In response, Cameron said Britain had, since 2004, dealt with the influx of 1.5 million immigrants from the rest of the EU, with the bulk coming Poland and other former communist states.

"This has been one of the biggest migratory flows in our history," Cameron said.

"And it doesn't help if we don't talk frankly about the problems it has caused."