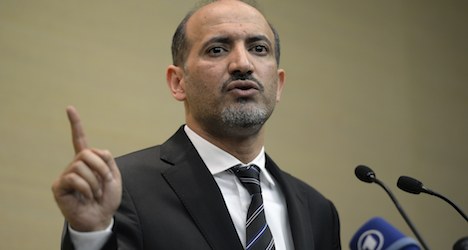 Pulled together by the United Nations, Russia and the United States, delegations from President Bashar al-Assad's regime and the opposition battling to oust him are expected to meet.

Preparatory talks were held this week in Montreux, the small town overlooking Lake Geneva that is preparing to return to normalcy after an invasion of international diplomats and the attendant press corps.

The UN-Arab League envoy on Syria, Lakhdar Brahimi, met behind closed doors with both sides on Thursday to lay the groundwork for direct talks, but few details emerged about how they will proceed.

A senior State Department official said Brahimi was set to meet both sides again on Friday.

"He hopes to have them at the table tomorrow and we'll see what happens," the official said.

"We knew this would not be an easy process."

According to diplomatic sources, Brahimi will bring both delegations in the same room at the UN's European headquarters in Geneva.

"He will give an introductory speech of about 30 minutes," said one diplomat, adding that the Syrians would not speak during that opening session.

Each delegation was then expected to be led back to separate rooms, with Brahimi shuttling back and forth before bringing them back together for negotiations to begin in earnest.

This first round of talks is meant to last "until the end of next week . . . but it could of course all collapse as early as Friday," said one Western diplomat.

The UN-sponsored conference — the biggest diplomatic effort yet to resolve Syria's devastating civil war — opened in Montreux on Wednesday with heated disagreements among the two sides and world powers.

Expectations are very low for a breakthrough at the discussions, which officials have said could last up to ten days, but diplomats believe that simply bringing the two sides together for the first time is a mark of progress and could be an important first step.

"We've begun the process, getting the parties in the same room is significant, having them in Geneva is significant," the State Department official said.