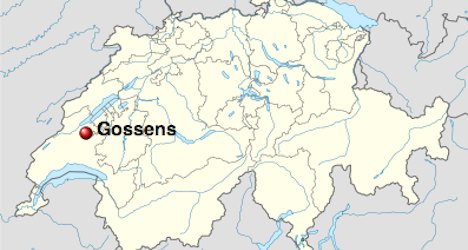 Gossens, population around 130, is located near Yverdon-les-Bains in the northern part of the canton of Vaud. Map: Wikimedia Commons

This comes after the arrest last September of a woman in her 60s who stands accused of arson in nine cases dating from November 2012 to September 2013.

The fires were always quickly put out but they caused damage to cars and doorways to residences along the Chemin des Granges Brûlées.

“This name has always upset every one,” the author of the text for the petition told 20 Minutes.

“I’m not saying that it had an influence (in the fires) but it’s possible.”

The petition’s author, who was himself a victim of one of the fires, said he was surprised to learn who the alleged culprit is.

Another resident who suffered damage from several fires was also at a loss over the arrest of a neighbour.

“She was the kindest women in the neighbourhood with me,” she told the newspaper.

Suffering from psychological problems and alcoholism, the woman even set fire to her own home, according to police.

She was caught after officers placed a surveillance camera on the street.

However, the woman denies any wrongdoing.

But even the accused woman’s daughter has signed the petition calling for a new name for the street, 20 MInutes said.