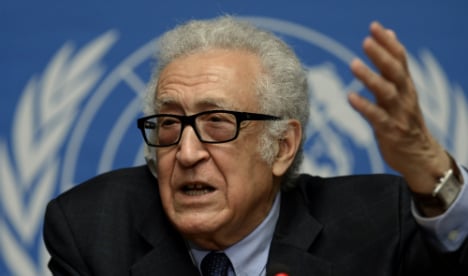 No ceasefire was agreed, talks on a transitional government never began, and a deal to allow aid into besieged rebel-held areas of the central city of Homs went nowhere.

Clouding the horizon further, the Syrian Observatory for Human Rights said nearly 1,900 people had been killed since the talks began a week ago.

Washington also warned Syrian President Bashar al-Assad he could face consequences for failing to live up to international agreements on removing his chemical weapons stockpile.

Back in Geneva, the week of closed-door negotiations ended with the opposing sides continuing to spar over who is to blame for the bloody conflict that has claimed 130,000 lives.

UN mediator Lakhdar Brahimi, who orchestrated the first meeting between the two sides since the conflict erupted in March 2011, said he aimed to host a second round of talks starting on February 10th.

But Syrian Foreign Minister Walid Muallem said there were no "tangible results" from the Geneva talks, and that Assad and his government would ponder whether it made sense to return for a second round.

That sparked criticism from key opposition supporter the United States.

Opposition chief Ahmad Jarba confirmed his team would be back, even though sitting down with the regime for the first time since the start of the war was like "drinking from a poisoned chalice".

But he stressed that its presence was conditional on receiving "the means to defend our people on the ground."

"The pace of supporting our revolutionaries is quickening, as you may have heard in recent days," he said.

A senior US official hailed the planned visit, stressing that it indicated "the Russian side recognises that the opposition National Coalition also has a role to play in resolving the Syrian conflict."

Brahimi has urged the United States and Russia, which struggled for eight months to get the warring parties to the table, as well as others to exercise their influence to end the bloodshed in Syria.

US Secretary of State John Kerry and his Russian counterpart Sergei Lavrov were scheduled to meet in Germany Friday evening ahead of the Munich Security Conference, which Jarba and Brahimi were also scheduled to attend.

It remained unclear though whether the diplomatic push can eventually help move things forward.

Neither of the negotiating sides seemed to budge an inch from their long-held positions in Geneva, where the talks revolved around a never-implemented roadmap to peace drawn up by world powers in 2012.

The opposition insists that the transitional government called for in that text, known as the Geneva Communique, requires Assad to step down.

By accepting to negotiate under the text, the regime is "walking in its own funeral procession," Jarba said.

The regime flatly rejects this, and insists that the main focus of the Geneva talks must be on quelling the violence and "terrorism", for which it blames the opposition.

"Neither in this round, nor in the next will they obtain any concessions from the Syrian delegation," Information Minister Omran al-Zohbi told applauding pro-regime demonstrators outside the UN's European headquarters in Geneva where the talks were held.

Just getting the rival camps to sit down for the first time has been seen as a feat by peacemaking veteran Brahimi.

"This is a very modest beginning, but it is a beginning on which we can build," he said, adding that he had noted "a little bit of common ground, perhaps more than the two sides realise or recognise."

Brahimi said though he was "very disappointed" over the lack of breakthrough over the desperate humanitarian situation in Syria.

The regime had pledged early on in the talks to allow women and children safe passage from rebel-held areas of Homs besieged since June 2012, but aid convoys remain on standby waiting for authorisation to enter.

The rival camps have traded blame over who is holding up the aid to the about 3,000 people living with near-daily shelling and the barest of supplies.

Elsewhere though, the UN managed to distribute food for a second day to the besieged Yarmuk Palestinian refugee camp in south Damascus, where dozens have died from shortages of food and medicines.

This rare bright spot was however seen as unrelated to the negotiations in Geneva.

Of the nearly 1,900 people who have died in the Syria conflict since the Geneva talks opened, at least 498 were civilians, the Syrian Observatory for Human Rights said.

Forty of them died from a lack of food and medicine in areas under government siege, according to the report.