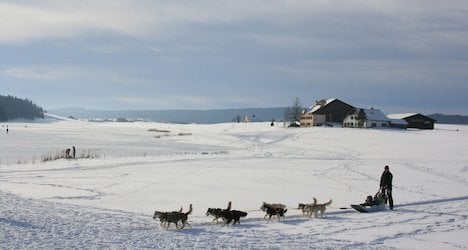 The valley of La Brévine in the canton of Neuchâtel aims to attract tourists with its weekend festival, which gets under way on Friday, February 7th.

Roads are banned to motor vehicles for a “snow-up”, where people use cross-country skis, snow shoes or just durable boots to get around.

A frozen lake, dog sleds, snow sculptures, balloon rides, dogsledding and an artisanal market are all part of the festival, which was unveiled on Monday.

“People come here in winter and we hope that they’ll return in the summer,” said Jean-Maurice Gasser, chairman of the “Valley of the Brévine — Siberia of Switzerland” association, according to a report from the ATS news agency.

A village of snow and ice will be built on the Lac des Taillères and the Wind Band Neuchâtalois, a 60-person ensemble, are set to perform a concert to kick off the event on Friday night.

Only one minor problem with the festival that aims to make a virtue of adversity: it seems La Brévine is not quite as cold as it used to be.

But this winter, the coldest day was a mere minus 22 degrees, on January 25th.

And a return to biting cold is not expected for the weekend, when the freezing level for snow is expected to range from 1,000 to 1,500 metres above sea level.

“We are tributaries of the times,” Gasser said, referring to the mild weather this year, ATS reported.