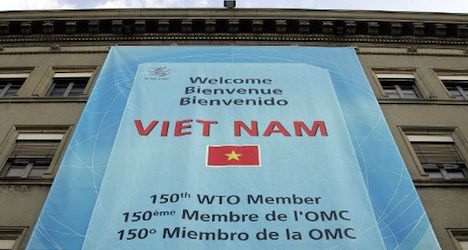 Dang Xuong Hung, who served at the consulate from 2008 to 2012, when he formally withdrew from the Vietnamese Communist Party, told local Geneva TV station Leman Bleu on Sunday that he had applied for Swiss asylum last October.

"The Berlin wall fell 25 years ago, but Vietnam is still under a communist regime," he said.

"The Vietnamese Communist Party persists with its aim to continue the dictatorship, to continue with a one-party regime."

Dang, who said he had been working for the Vietnamese foreign ministry since 1983, blamed the one-party system for "the total crisis" Vietnam was experiencing in all areas.

"There is an economic crisis, a political crisis, and crisis in education, in health," he said, adding that he hoped his defection would prompt others to follow his lead.

The news came ahead of a review before the UN's top human rights body of Vietnam's rights record.

In a letter to the Vietnamese delegation attending the so-called Universal Periodic Review before the UN Human rights Council, Dang voiced empathy with diplomats who "care about Vietnam, but are shackled by invisible bonds".

He urged the delegation to openly admit to Vietnam's violations.

"Once we dare speak the truth, we won't have to waste time dishonestly concealing the facts," he wrote.